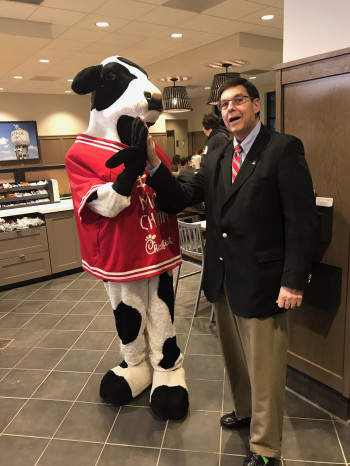 John Brown serves as the Executive Director/CEO of CIADA (Carolinas). John joined the CIADA in 2010.  Currently, in his 12th year, John has had a long-lasting impact on the CIADA and is a trusted leader. John brings a wealth of business and non-profit experience to this leadership position.  Brown has an accomplished history in business, philanthropy, and government relations as a trusted advisor to elected officials, corporate and non-profit executives.

Prior to joining CIADA, John served in several leadership positions in the transportation industry, including as director of corporate communications for Rolls-Royce North America. Earlier, John served as a corporate officer and vice president for Arvin, a top 5 global automotive parts manufacturer.

Active in the community, John was elected to four terms on the city council and served as president of the City Council. In addition, he has sat on the boards of the Local Housing Authority, United Way, Boys and Girls Club, Habitat for Humanity and New American Schools.

After graduating from Ball State University, John started his career by serving in the offices of the Indiana Lt. Governor and Governor; and served as a staff member to the Vice President of the United States, The Honorable George H.W. Bush. John also served on the re-election campaign staff for Reagan-Bush in 1984. Following the election of George H.W. Bush as President, John continued to serve in various capacities.

John and his wife Katherine, have three grown children. William, Martha, and Margaret and is a proud grandfather to Carolyn and Dorothy, his first grandchildren and daughters of Martha.

On a personal note, John’s first car was a 1972 Red Mustang and he really enjoys his two Goldendoodles named Nellie and Lucy.

John is also an author of three books, two of which were Amazon best sellers.